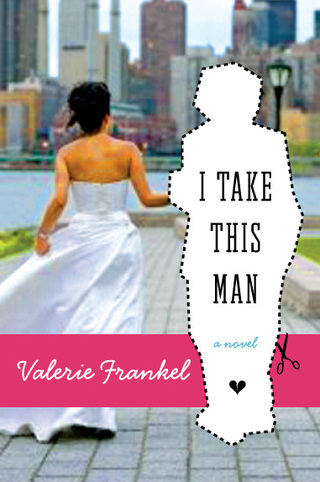 "Quite simply, Frankel makes reading a blast. No premise is too outlandish and no character is without a set a flaws. The plot is cleverly kooky and not one many authors could realistically pull off. Frankel has an endless bag of tricks that seems to get deeper—and more hilarious—with every novel."—Romantic Times

"I TAKE THIS MAN is an entertaining portrait of relationship hang-ups, vengeance and one missing groom. Valerie Frankel scores again with a humorous story that had me laughing until my sides hurt. Penny and Bram are a misguided couple that need help in finding their true feelings for one another. Keith and Ester search together to find Bram, even when Ester knows where Bram is hidden. The skewed relationships of all the main characters, Penny, Bram, Ester and Keith are so immensely appealing in depth and characterization. I absolutely adored the antics in this story. Frankel wonderfully explores family relationships with incredible insight, humor, and compassion. Readers will find this a zinger of a story that is a pleasure to read."—Romance Junkies

I Take This Man

Dear Penny,
I can’t go through with it.
Sorry,
Bram

“What does it say?” asked Vita, reading the note over Penny’s shoulder. The redhead gasped like she’d been stabbed in the lung and said, “This is cruelest, most cowardly, despicable act, punishable by—”
“By death,” said Ester flatly.
“Are you okay?” Vita asked Penny.
Morris said, “She hasn’t blinked.”
“Stop staring at my daughter,” said Ester, swatting at the once and former best man.
Penny examined the terse message again. Bram hadn’t wasted a word to throw away two years of her life. She looked at her mother, a woman who’d also been abandoned by a man. Ester scowled, apparently furious, but Penny knew her Mom had to be relieved.
“This is beautiful stationery,” said Penny, fingering the sheet. “Feel the bond. The embossed leaf. We should order a box.”
Then Penny’s legs—her livelihood, her strength—trembled and weakened. She slid to the floor, the yards of crinoline and tulle of her gown billowing and burying her, providing a safe tent where she could have some privacy.
“She fainted!” Vita screamed in perfect pitch, well trained by her job as a (basic cable) soap actress. “Call an ambulance!”
“She’s just crying,” said Ester coolly.
“She’s hysterical!” boomed Vita.
But Penny wasn’t crying. She was laughing (hysterically) at the comedy of it all. The Bridal Barbie gown. Two hundred fancy white people waiting in the ballroom. The $75,000 of her mom’s money gone to a wedding that wouldn’t happen. It was funny, thought Penny. In a tragic, soul-annihilating kind of way.
Penny slowly gathering her wits and skirts. “As soon as my legs start working again, I’m going to get off the floor and sit on that couch,” she said. “I’d like a cocktail. After that, I’m open to suggestions.”
Chapter Two

“Penny, stay right where you are,” said Ester. To Morris, she said, “You. Come with me.”
By the cummerbund, Ester yanked Morris out of the charmless bridal prep-room she’d paid an extra $1,000 for the use of. Shutting the door behind her, she pulled the disheveled young man a few yards down the hallway so Penny couldn’t overhear their conversation.
“Where is he?” she asked.
“I don’t know,” replied Morris.
Up to her diamond earrings with lividity, Ester would have liked to spit (but just couldn’t). “You do his dirty work,” she said, disgusted.
Morris said, “I’m just the messenger.”
“Is your mother living?”
“My mother?” he asked.
“I’m going to call her, and tell her how you lowered yourself today,” said Ester. Although Morris outweighed her by forty pounds (all of it male muscle), Ester matched his height. She bore into his blue eyes, as only a mother could, telegraphing the maternal manipulation trifecta: “Guilt . . . Shame . . . Disappointment . . . Guilt . . . Shame . . .”
“Stop,” said Morris, blocking his eyes with his arm. “Okay, okay, he’s in his room upstairs. I left him five minutes ago.”
“Get out of my way,” said Ester, maneuvering around the big lug in the narrow hallway.
“You’re not really going to call my mother are you?”
Ester left him to wonder. She plowed down the corridor, hurried passed the open ballroom doors, and clicked across the marble lobby floor of New Jersey’s swankiest hotel to the main elevator banks. An express car swished open and she punched the button for the twelfth floor. The wedding party had secured several suites there for the weekend.
Ester was alone in the elevator. In her short ride, a red rage rose in her body like mercury in a hot thermometer. She’d felt such intensity of anger only once before, the day her husband Russell Bracket announced he was leaving her for Penny’s British au pair. Ester flashed back to that day, that minute, in the pong room of their mansion on Overlook Lane. Russell was expertly bouncing a hollow ball on a green paddle when he exclaimed, “I’ve fallen in love with Jemima!” like Ester should be happy for him about it.
Ping. The elevator doors opened. Ester strode toward the hotel’s bridal suite. She knew the number, having sent a bottle of Dom Perignon there an hour ago. As she marched, Ester’s eyes flitted across door numbers and the pink toile wallpaper depicting scenes of bucolic life, children, their pets, apple trees. She was so focused, Ester didn’t notice the large empty laundry cart in the hallway until she’d crashed into it.
She scanned the hallway for a hotel housekeeper. Seeing no one, she proceeded to room 1212 and knocked on the door. Amazingly, it opened. The bastard hadn’t yet fled. In fact, Bram Shiraz, 25, stood right in front of Ester in the opened doorway, guileless, in jeans, a black T-shirt, bare feet. She detected a ripple of disappointment in his eyes when he saw her. Had he hoped his visitor would be Penny? Did he really think her daughter would come up here to grovel?
Bram’s expression quickly returned to his usual casual inscrutability, the placid blankness only handsome men could achieve. Ester knew that look well, from Russell. She’d been tricked by it, just as Penny had been suckered by Bram’s mink hair, his round brown eyes and lanky build, foolishly believing this man was as sweet and soulful as he looked. Bram didn’t deserve his physical gifts, thought Ester. He should be a hideous hunchback.
A half-packed suitcase was on the bed behind him.
Ester opened her mouth, and a laryngeal squeak wobbled out.
Bram didn’t wait for more. He returned to the bed and resumed packing as if she weren’t hovering in the doorway, wishing him ugly. The gall of him! Each of his movements filled her with revulsion. At least now, with the wedding off, she wouldn’t have to see him ever again. She should thank him for what he’d done.
Without look up from his toils, he said smugly, “You don’t have to thank me.”
As if he’d ended the wedding because she was opposed to it! As if he’d do anything selfless to save his life.
“You got what you wanted,” said Bram. “Why are you here?”
Ester couldn’t say why she’d felt compelled to storm up to his room. Honestly, she hadn’t expected to find and confront him. She’d spent her entire adult life (early and enduring) avoiding tense situations. Now that she was in the vortex of one, Ester was at a loss.
Churning mentally for a tart and cutting reply, Ester’s eyes shifted left and landed on the room’s dining table. An ice bucket with the champagne she’d ordered for the bride and groom was upon it.
Bram closed the suitcase. He sat on the bed next to it to slip on his socks and sneakers. “I know you blame me for Penny’s injuries,” he said. “They were accidents.”
“How does someone accidentally dislocate her jaw?” she asked, finding words finally, plus the gumption to enter the room and close the door behind her. She moseyed toward the dining table, her slender fingers gripping the bottleneck. It was slippery with condensation, but she held tight.
He said, “I don’t have to explain what happened. To you.” He might as well have said “to ewwww.”
Then he shrugged as if they were discussing the price of milk. That non-committal rise and fall of his shoulders was, in her mind, as much of an admission as Ester could hope to get. Anger peaking, she went with it.
Ester made for the bed. Bram met her eyes and she saw the guilt inside. With the mighty force of middle-aged rage, Ester swung the bottle at his casually handsome head.