Buy at Target
Buy at Indiebound
Buy at BN
Buy at amazon
PW on FOAK
In this engaging novel, seasoned author Frankel (It’s Hard Not to Hate You) creates four compelling female characters who lead wildly different lives but have one thing in common: their children all attend the same New York private school. Under the pretense of creating a Diversity Committee, blonde beauty Bess Steeple invites the three other women—Robin, Carla, and Alicia—over to her Brooklyn townhouse for a meeting. To break the ice, the women engage in a poker game where the betting currency isn’t money but secrets. As the game progresses, it’s revealed that Alicia’s in a sex-starved marriage; Robin’s daughter is the result of a one-night stand; Carla’s uptight husband is the source of endless stress; and Bess’s mother is a famous feminist. The meeting turns into a monthly poker game, where the women forge a strong bond while struggling, individually, with life’s challenges. The fresh dialogue, three-dimensional characters, and fast-moving plot lines are solidly entertaining. 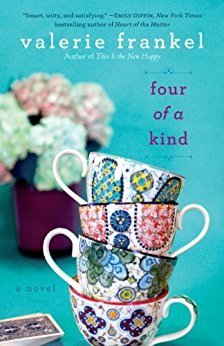